Hi guys and welcome to my place! 😀

As the name indicates, this is a Tactics RPG and to be honest I’m not really a fan of those, I end up get tired of it. The thing is, Final Fantasy Advanced Tactics is just so well done that you just end up loosing yourself in this world and completely get addicted to it! Let’s start the review!!! 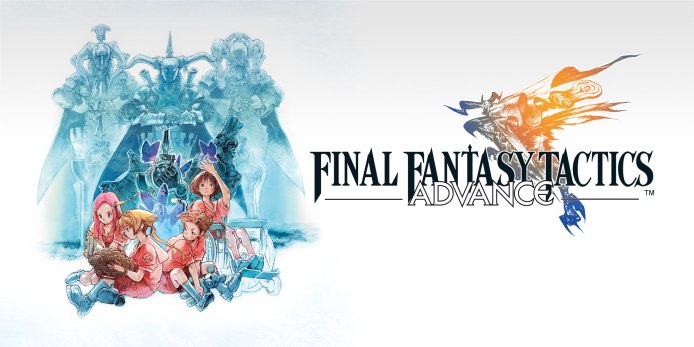 I’m not giving away too much of the story because I don’t want to give too much spoilers and the pace is not as fast as a RPG. This way, if I ended up telling you much of the story you would completely lose the “getting into the characters first” factor that makes this story even better!

The story starts in Marche’s school (the main character) and they are having a snowball fight. This snowball fight main objective is to teach you how to play the game and understand how the battles work, for example how to have higher chance of dodging an attack or higher chance of hitting when attacking… Those kind of things. However, the game takes this opportunity to introduce you the main characters besides March. You have Rytz, a strong girl who always speaks her mind and is the embodiment of how girls are also strong people and have the freedom of their own opinions and then you have Mewt, a more quiet guy who is bullied by their peers. You understand this while the snowball fight is happening, Rytz has a line about “Gender discrimination” while Mewt is chosen as the target for all the snowballs in the opposite team. The snowball fight ends up with Mewt getting with a snowball with a small stone inside in his eye. 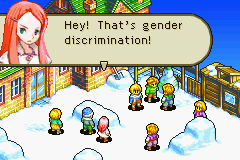 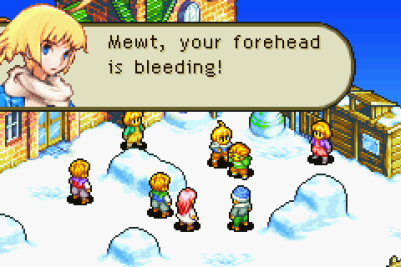 At the end of the snowball fight they decide to go together home and Mewt talks about a fantasy book he wants to read. The other two seem interested and they decide to meet up to read it all together. Since Marche has a younger brother who is in a wheeling chair, they decide to meet in his house that evening to read the book. After reading they all start talking how cool would be to be transported to a fantasy kingdom like in the books and video games, little they know that is what it is about to happen. 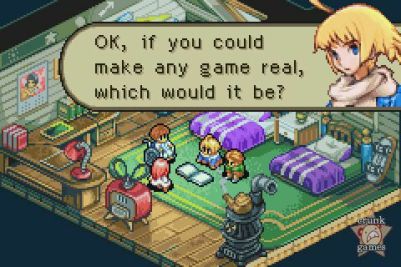 During that night you get a cutscene where you see the St. Ivalice town transforming completely into a new world. Marche sees himself in a town without knowing where he is. He decides to explore a little, however accidentally he bumps into a Bangaa and this Bangaa together with his friend start a fight with him. Luckily for Marshe, a Moogle comes to his rescue and they start the fight with the bangaas. 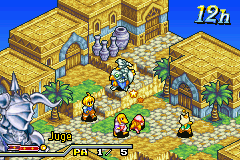 Now, I’m going to take a moment to talk a little about this new world called… Ivalice. Rings a bell? It should because it’s the same world that you play in Final Fantasy XII. Let’s start with the races! You have 5 races in this game, Humans, Moogles, Vieras, Bangaas and Nu Mou. Rings a bell? Again the same races you can find in Final Fantasy XII. Now, in this world fighting is allowed, I would say it is even encouraged, however you have rules! Yes! For example, you may have a rule where you can’t use magic, during that fight you just can’t use magic. Depending on the severity of the transgression you get yellow or red cards (If you watch soccer it’s something alike), if you get a red card you are thrown into prison for some days, if you get 2 yellow cards in a fight? Prison with you! If you manage to only get one yellow card in each mission, but if you start abusing the times that character gets a yellow card? Prison with you! Who regulates this matches you ask? Judges… Yes remember the judges from Final Fantasy XII? That’s them!

Continuing with the story… The bangaa ends up using an item even though the rule of the day is “you can’t use items” the judge gives him a red card and he’s thrown into prison. The moogle identifies himself as Montblanc (again, Final Fantasy XII), you explain his story to him, he believes you and invites Marshe to enter his clan. A clan he explains are a group of people who pick up missions from people do what they ask and receive money in trade for the service… The clan of course is called Centurio (Again, Final Fantasy XIII – although here you can change the name of tha clan for what you want). Basically see the missions you get to kill the side bosses in Final Fantasy XII? Well, here you will be in the center of it. Marshe decides to join the clan because it’s the best way to travel around and start getting information how to come back home.

From here you will go to the 4 corners of Ivalice trying to find the way to come back to your own world. However, remember that I talked about the other important characters? Yes, they were also transported to Ivalice and you will find them sooner or later, but it does take a time and I don’t want to mention those events so you can have a spoiler free gameplay and get the enjoyment of finding those characters as I did!

The gameplay is one of the best I ever played in a tactics game. Yes, I’ve tried some of them and this is one of the few that I actually played it all and enjoyed it every second of it (Jeanne D’arc for PSP being the other one).

So I’ve already explained you the rules system. Fighting wise, well… It’s a tactics RPG and it’s not really that different from other games. You choose your starting party, sometimes you can have 6, other times you will only get 4, it really depends on the mission. Each character you choose has their own classes (which I will talk below) and well, you beat the crap out of your enemies while taking into account the rules and making strategy so that your own characters don’t die (since if they get knocked down for 3 turns they will just disappear and you can’t play with them again… I think xD). 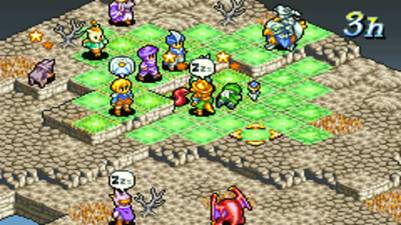 Let’s talk about the classes, which is one of the highlights of this game. First there are 2 people who you can’t kick out of your clan. Marshe and Montblanc. Secondly, most of the missions you will have to have Marshe in your team playing. Depending on the race of the character you get different possible classes, which makes sense. See the pic below that really explains it all! 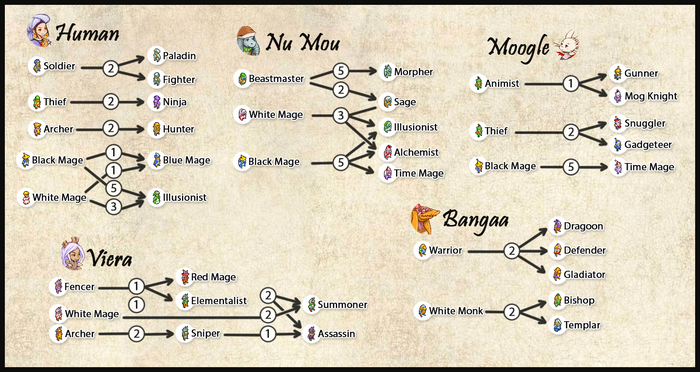 So as you can see, different races gives you different classes, those classes need to be leveled up and when that is done you will start getting further classes. To be honest, I love this job system. Why you ask? Because it really makes you to play with all races! Moreover, it’s really fun combining different classes and see if they work or not. Of course, as previous installments you will get ability points and when you master a skill you will be able to use it even if you change your class. Each class has their own weapons and armor, so expect to waste a lot of money. 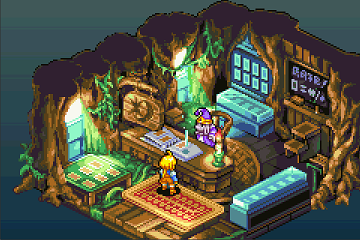 The game is played by missions you partake in pubs, even the main story quests will be there waiting for you! Now, I truly challenge you to do all of them! They ARE a lot! And then you have that some quests only will be able to be accepted if you process some key item, this item will be a reward in other different mission. More than this you still have two side arcs that you can complete. So, there is plenty to do and to be honest the game is made in a way that you always find yourself having fun, (I think the music is the main reason!) so, although you will end up grinding it doesn’t really start to be a bother.

You also will have a map that starts empty, while doing quests and advancing in the story you are able to unlock new areas and you are the one that choose where they go in the map. 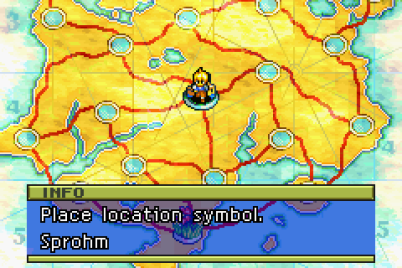 I love the graphics of this game! Yes, it’s a gameboy game so it will not have the graphics of a PS4, but the game is colourful and you have plenty of different maps where you have missions, desert, forests, plains, you name it and it will be there. 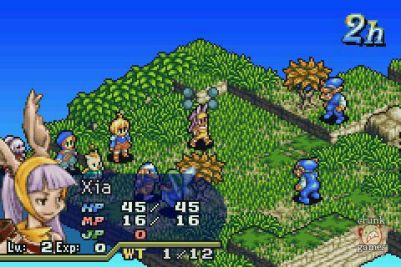 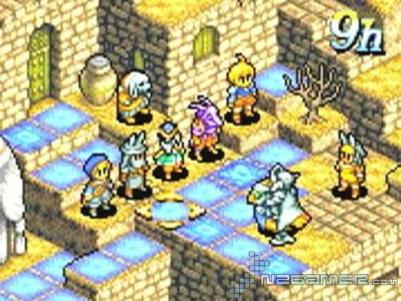 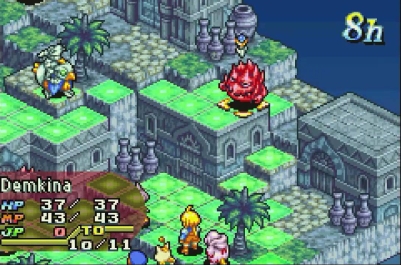 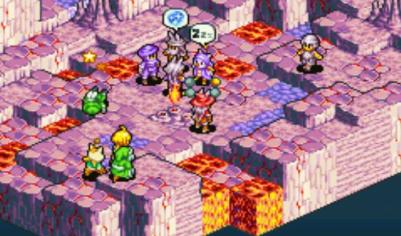 I also love how the characters are drawn. The main ones of course are completely distinct since the other characters are all equal, only changing their appearance when you change classes, but nevertheless since the characters are well drawn I don’t really mind. You also have a ton of monsters and I also love the way they were designed. You can see that the creators did take attention to the details and even though with a more classic game vibe, you do notice those details that make the difference.

The game does not have voice over, so I’m only going to talk about the OST. It is true that it does not have so many musics as a main game of Final Fantasy has, nevertheless, the ones they have are pretty good! As I told you, I think one of the mains aspects that makes you do repetitive missions (while grinding for example) and love it non the less is the music! If you already played Final Fantasy XII then you will also feel the vibe of its music in here. My favourite one has to be the music which appears in most of the fighting encounters (Mobile players can hear it here):

And that’s all I have for today folks! As I told you, this is without a doubt my favorite game for Gameboy Advance. The game is outstanding and I had so much fun playing it! There are many things for you to do and to try. Moreover, the game is not as easy as it seems, making you think carefully how to win battles (Although the difficult curve is way better than Final Fantasy Tactics for PS1).

I give Final Fantasy Tactics Advance 5 Battle Rules out of 5 Races!

Tell me, have you ever played this game? If yes, what do you think of it? If not, well, are you thinking on giving it a try? Comment down below! 😀 Next week I’ll come back with more Final Fantasy \o/ Also, tell me if you like these kind of rankings where I try to be a little creative (although failing most of the times) or it really doesn’t speak to you that much! 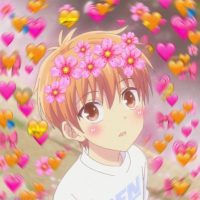